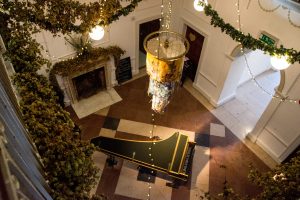 The Mansion houses a small community of artists. Their studios are private but may be visited on open days. Froso Papadimitriou was born in Thessaloniki, Greece. In 2006 she completed a BA (Hons) in Fine Art at Middlesex University, followed by an MA in Arts Management at Birkbeck University. Froso experiments with multiple art forms and has collaborated with galleries worldwide. You may already be familiar with her work as an example hangs in the Atrium.

Tell about your back story

Creating, or better ‘experimenting’, is something I’ve always been keen on. According to my parents, I always had a tendency to make, dismantle and reconstruct objects; usually not the way they were before and definitely not functioning anymore – so all valuable items in the house were hidden until my late teens. Even in my early years at school, I was left to my own devices to make things – in order to be kept quiet.

However, art was not part of my future aspirations as a child. I studied Science and was aiming to become a pilot, but somehow ended up on a graphic design course. That, and love for comics, ignited my creative explorations. From there, I relocated to London for a Fine Art course and I have been an art maker ever since. 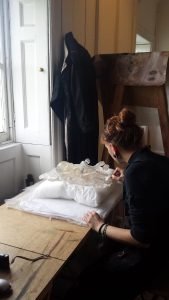 Why did you choose the Mansion?

I heard about the Mansion from another resident artist. I chose it due to its location within the park and also being a resident in such a building is fascinating. The space fits exactly my needs as a maker and being surrounded by nature provides me with a serene environment to work in.

Tell us about your art hanging in the Atrium:

‘Slow the much oil’
Art installation ​
Thread, fabric, ink and pigments on recycled canvas and bicycle wheel
​
​For this work I have borrowed the silhouette of an imposing object of beauty and wealth, such as a chandelier/lamp, which has been used as a symbol to demonstrate wealth and power. However, this chandelier is made out of found and recycled materials and depicts images of a decline and destress of the modern times.

This work is aiming to raise questions about the relevance of values, beliefs and symbols we have inherited from our past to our contemporary life. 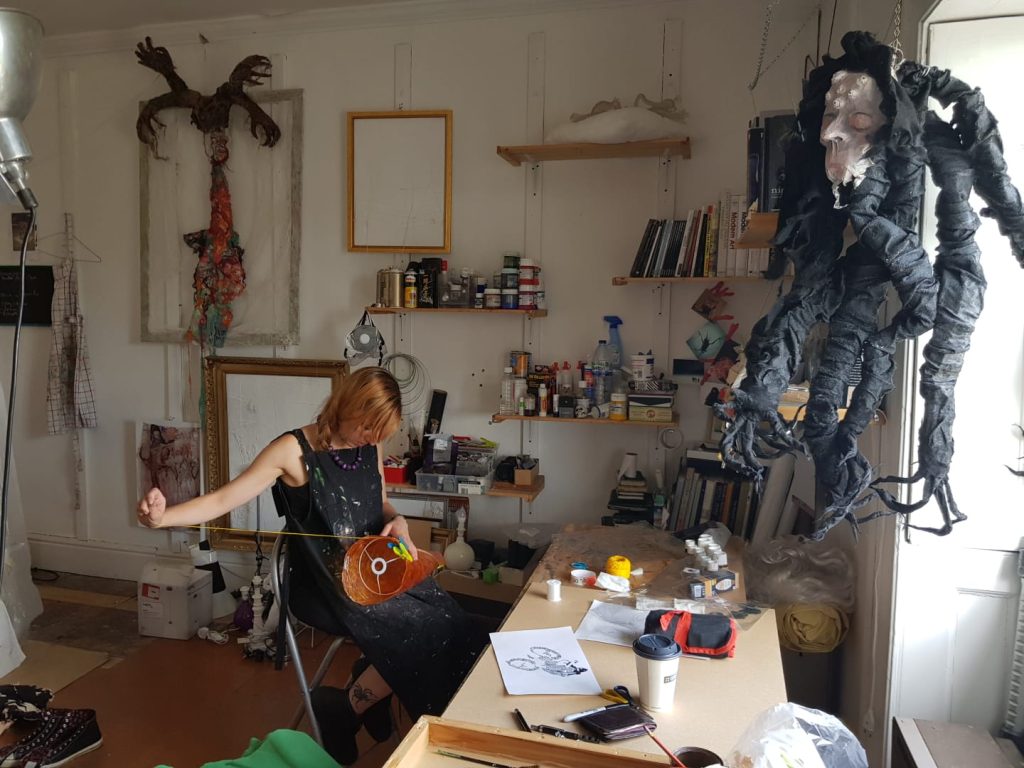 Froso in her studioI usually arrive at midday and work in the studio until late hours. When the weather is nice the park becomes quite a temptation and I have occasionally worked outdoors or instead of actually working I have cycled around the park and had a few picnics instead.

What are your career highlights? 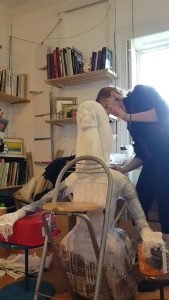 The major projects I have been involved are:

What are you working on at the moment? 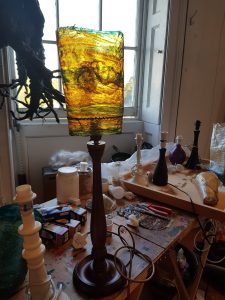 I have several upcoming collaborations with other organisations such as:

What are your hopes for the future?

To continue and expand my artistic work and career.

For the Mansion, I want it to continue developing as a multi-space for people to use and enjoy.