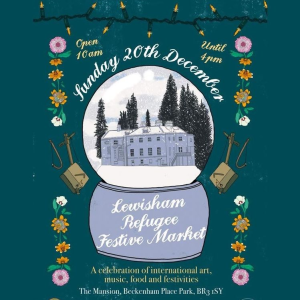 What is Create Without Borders?
Create Without Borders is a non-profit organisation dedicated to making spaces centred on refugee creatives. These spaces range from physical events such as the Lewisham Refugee Festive Market to online galleries – all intended to recognise, celebrate and promote the incredible creative output of people with lived experience of forced migration. These spaces also create opportunities for paid work, as well as collaboration and networking with the wider community. Speaking to creatives we quickly realised that one of the common barriers to practising art is not having those connections; creativity is fundamentally a collaborative activity (that’s why migration is so critical to creative cultural evolution) and being a creative is in this respect no different to being in business – it’s often who you know and not what. And of course the value of creativity in maintaining mental health has been widely documented.
Another aspect of what we do is to help remove practical barriers to creative practice via our Creative Fund. This provides small grants to purchase equipment and supplies. When we say creatives by the way, we mean in the broadest possible sense – artists, writers, chefs, designers, makers of all kinds and so on.
How did you guys come to be involved with the organisation?
We had both been volunteering with a mutual aid organisation centred on refugees previously and realised that, while front line services are essential, there is less focus on peoples’ needs to contribute and participate in art and culture. We’d had successes with various online events and felt like there was the appetite and space to start something sustainable, with the capacity to make a real impact.
We’re both based in Catford and what was very clear from the start of the pandemic was how much there is this incredible sense of community and solidarity in Lewisham borough. There’s a well established network of charitable organisations in the area, including some working specifically with refugees and migrants, plus spring saw so many new grassroots organisations spring up to meet various needs. So we felt like this part of London was a great area to start our project. Also knowing that Lewisham is actively seeking Borough of Sanctuary status and is London Borough of Culture (or will be when the pandemic ends) is hugely encouraging, as we’re basically at the intersection of both! 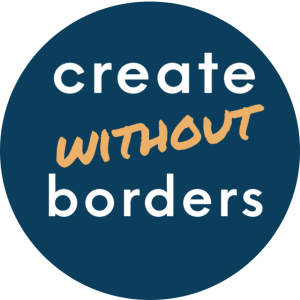 What can people expect at the market on Sunday 20th January? What is your objective for the event?
To bring some joy to people! It’s been a hard year for everyone, we know that refugee creatives and the organisations that work with them have some wonderful things to share and people want to buy unique Christmas presents. This year more than ever there’s appetite to buy thoughtfully, to spend your pounds ethically, locally and in support of independent organisations and makers; plus there’s the opportunity to pick up truly unique items you *know* can’t be replicated elsewhere.
Unfortunately moving to tier 3 meant we had to cancel our booked-out activity schedule, which included live music, storytelling sessions and live cooking sessions – but we’re working with the organisers of the sessions to make these happen online in the new year instead!
Stallholders include:
eko, a zine published by the Goldsmith chapter of STAR which raises the voice of migrants, volunteers and activists. eko will be bringing an exciting range of merchandise.
Shelby X Studios, dedicated to artivism and campaigning, selling a range of beautiful and inspiring art and merchandise
Haven Coffee, a refugee led enterprise selling hot drinks, bagged coffee and coffee subscriptions
Refugee Cafe, which celebrates food from around the world and works with refugees who practice culinary arts
How has the global pandemic affected the plight of refugees?
All over the world the pandemic has served to shine a spotlight on existing inequalities and the effect of these. Unsurprisingly it’s been especially difficult for people who have experienced forced migration. Many are housed in camps designed to accommodate only small fractions of the inhabitants, and often with extremely limited sanitation. In that situation it’s impossible to follow advice on preventing or mitigating the spread of the virus; you can’t maintain appropriate social distancing or self isolate when you share a tent with other people; you can’t wash your hands frequently if there’s no running water. This is happening in Europe right now, in Greece. And just down the road in Kent (and across the UK) people seeking asylum are being detained in overcrowded and unsuitable accommodation.
Throughout the pandemic Home Office have repeatedly ignored advice (and sometimes the law) in their treatment of people seeking asylum – for example, while there has been a ban on evictions generally, people whose asylum claim had been rejected were evicted from their accommodation (bear in mind too that over a third of applications are granted on appeal). We have heard also of people being detained and deported without access to legal advice and of unaccompanied children being detained in adult facilities. While there was an increase of £20 to Universal Credit to allow for the extra costs covid incurs, people on Asylum Benefit received only a few more pennies a day – bringing the support to just £5.66 a day. The UK refugee resettlement program was paused in March due to the pandemic, as were similar programs around the world – but while those have long since restarted, our Home Office has only just reopened the scheme and has made no commitment to extending it or providing routes of safe passage for family reunification. In fact, on International Human Rights day, they announced a raft of changes to migration legislation that will basically deprive many people seeking asylum of theirs.
Why did you choose the Mansion to host this event?
We’re local, so were already familiar with the park. We were in discussions with Lewisham Council and they suggested getting in touch with the Mansion as they thought there could be room to collaborate and that’s certainly been the case! The Mansion is such a fantastic space with so much character and is really loved by locals, so we couldn’t think of a better place to hold an indoor market.
What work does Create Without Borders have on the horizon for 2021?
That’s so tough to answer at the moment! We’re working on an exciting initiative with Shelby X Studios and London Must Act to create campaign materials with the aim of galvanising support for the Europe Must Act mission, looking at Lewisham as a positive example of local action for change.
We’re a relatively new organisation so there are some fundamental things we’re prioritising sorting out, like a website. That will give us a more flexible and accessible space to promote creatives and sell their works – watch this space!
We’re hoping to run several art exhibitions, subject to things re-opening, and are in conversations with a number of other organisations working in this space about collaborative events, especially around Refugee Week in June. Our greatest wish is that we can start organising physical events with music, dancing, food again soon – we’ve had a lot of success with digital formats but there’s really no substitute for face to face interaction when you’re collaborating. That’s when the magic happens!
Instagram https://www.instagram.com/createwithoutborders/
Facebook / Twitter @CreateWOBorders 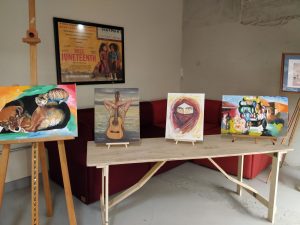 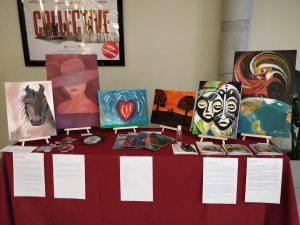 Artwork will be for sale at Lewisham Refugee Festive Market